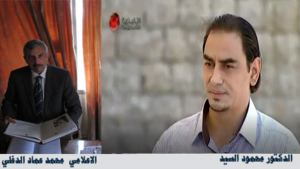 Artifacts uncovered from various archaeological sites in Syria document the creativity shown by ancient artists from various eras and cultures in embodying a figure that symbolizes two values humanity has cherished throughout history: Ishtar, Inanna, Aphrodite, Venus, the goddess of love and beauty. the name of Aphrodite, the goddess of love and beauty in Greek mythology – who was later worshiped by the Romans as Venus – means the delighted flower. Aphrodite was the source of inspiration to all artists and sculptors of that age who competed to bring their own vision of the beauty of the female form to life in marble and mosaics.

Researchers believe that the worship of Aphrodite originates from the East, with evidence suggesting that the goddess’s characteristics are almost identical with Ishtar, the East Semitic Akkadian, Assyrian and Babylonian deity of fertility, love, and sex, leading experts to suggest that Ishtar is the inspiration behind Aphrodite and the myth cycles associated with her. While some posit that the roots of Aphrodite can be traced back to primordial deities like the earth goddess whose carven likeness is known as the Venus, it could be argued that it was in Mesopotamia and the Levant where she began to take shape into the perennial icon of womanhood and beauty, when she was Ishtar.

In her various incarnations, the goddess of love and beauty is depicted as a graceful, voluptuous woman with bright eyes. Her smile brings peace and tranquility into the hearts of those who behold it, and when she passes by, springs gush out, trees yield fruit, and flowers bloom and emit their fragrance. that Syria has hundreds of statues, drawings and bas-reliefs depicting the goddess Ishtar, some of which are considered rare masterpieces. Damascus National Museum and the museums of Aleppo, Palmyra, and Raqqa contain some of those sculptures, the most ancient of which dating back to the third millennium BC.

At the dawn of the second millennium BC, the worship of Ishtar spread on a large scale all over Syria. At that point in history, the artists began depicting her as more beautiful and sultry, and they began to carve her image on jewelry made of gold and silver. Some of the notable findings that date back to the Bronze Age are two golden pieces of jewelry that bear the image of Ishtar. They were discovered at Ras Shamra, an archeological site located in Syria’s coastal area, and are now preserved at the Louvre. A basalt statue of Ishtar wearing an embroidered gown was unearthed in Ain Dara Temple in the northern city of Aleppo. It dates back to the Iron Age, the first millennium BC. Two other figurines of the goddess dating back to the sixth century BC were uncovered at the same site. They were made with remarkable skill from baked clay of pinkish hue.

Depictions of Ishtar, who evolved through the centuries beyond being the goddess of love into a goddess of both war and love, were being made after the birth of Jesus Christ, a prominent artifact – now preserved at Damascus National Museum – is a bas-relief of Ishtar in which she is depicted seated with a crown on her head and her left hand holding one of her braids. This masterpiece was uncovered at a Palmyran archeological site. states that many researchers say it’s obvious that the Greek sculptors who came after those eras drew inspiration from ancient Levantine and Mesopotamian art, and that their methodology and technique of sculpting and the beauty standards they embraced originated from Syria, and later in history they were passed to the Romans through Sicily, Greek Italy, Campania, and Alexandria.

Moving on Greek mythology, that myths say that Aphrodite was born in Cyprus after the titan Cronus (the father of Greeks’ chief deity Zeus) castrated his father, the sky god Uranus, causing blood and semen drops to fall in the sea and form foam. The myth goes on to say that before the next sunrise, the foam split and a lady of exquisite beauty emerged, her skin as white as foam, with long luxurious hair. Her name was Aphrodite. The ancient Greeks believed that Aphrodite was a protector of sailors as well as a patron goddess of warriors in Sparta, another similarity with Ishtar who was also a dual goddess of the conflicting spheres of love and war.

Later, that duality began to shift, with more emphasis being placed on her role as a goddess of love. In his poems, Homer said that Aphrodite is Zeus’s daughter from Dione, daughter of Oceanus. The Greek bard described her as a goddess that does not take part in wars because her dominion is over the hearts of gods and mortals, being able to defeat any of them with her charms except for the goddesses Hera, Hestia, Athena, and Artemis. It should be noted that Aphrodite may have lost her mantle as a patron of warriors in favor of other goddesses, mainly Athena, whose spheres of influence included courage and warfare and who assisted mythic Greek heroes like Achilles and Odysseus.

In Rome, Aphrodite became Venus, beloved and favored among the Roman goddesses. The deity who stood for love, beauty and fertility was prominent in many Roman religious’ ceremonies, she was the patron of weddings and was honored in many ceremonies and rites. The Romans thought that Venus was born in the sea and came to Cyprus’ shores in a conch shell. After her absence as Ishtar for centuries, the goddess reappeared as Venus in Syria when the Roman Empire’s influence spread across it. Artifacts discovered in various archeological sites in Syria document the Roman myth cycles of Venus’ birth, giving an example from Sweida province in southern Syria, where a Roman mosaic depicting Venus’s birth from a conch shell on an island was found at Shahba site.

A similar Roman mosaic was uncovered at Sarin site in Hasaka to the far north-east of the country, depicting the same scene, with the goddess surrounded by dolphins and mythic marine creatures. An interesting thing to note that further ties Venus and consequently Aphrodite to Ishtar is that the ancient Babylonians associated her with the planet Venus long before it was dubbed thusly, with them calling it “bright queen of the sky” as revealed by the Venus tablet, a record of astronomical observations dating back to the first millennium BC.

The birth of Aphrodite is not the only popular part of her myth cycles among artists. Another subject that artist love to tackle is her interactions with other gods, particularly her amorous relations which eventually drew the ire of Zeus due to the conflict among the gods that vied for her, causing him to give her hand to Hephaestus, the blacksmith god who was unsightly and lame. The bond between Aphrodite and her son Eros (or Cupid the Roman mythology) was shown in many antiquities, with several such artifacts showing Aphrodite carrying an apple (which may be a reference the Trial of Paris and the Trojan War) with Eros next to her, brandishing his arrows of love. The image of Eros or Cupid and his arrows would survive into modern times and become a commonplace representation of falling in love around the myriad cultures of the world.

An example of the aforementioned scene can be viewed at Damascus National Museum, which possesses a small bronze statue that dates back to the first century AD, showing a nude Venus standing on a base, putting on a crown, carrying a mirror in her left hand, and holding in the other her son Cupid, who is here depicted as a baby with a pair of wings. The love between Aphrodite and Ares, the god of war and father or Eros, is also a popular subject in ancient art, with one such example being a mosaic dating back to circa 240 AD which was discovered in one of Emperor Philip the Arab’s palaces in Shahba site. The mosaic is made from colored limestone, depicting Aphrodite with a halo above her head while a handmaiden crowns her with a laurel wreath, and next to her is Ares with Eros bearing his weapons. This mosaic is preserved at Shahba Museum. the Greek sculptors and then the Romans used basalt, marble, wood, ivory, bone, and metals such as gold, bronze, and silver in creating statues and carvings of the goddess of love, beauty and fertility. He said that a statuette of Aphrodite craved from a small piece of bone was found in Lattakia and is now displayed in the local museum.

The goddess of love influenced art well after her worship began to erode following the Roman Empire’s embracing of Christianity. Her birth remained a popular subject among artists throughout history, with Sandro Botticelli, William-Adolphe Bouguereau, and Alexandre Cabanel producing veritable masterpieces based on that myth, while her pairing with Ares (or Mars as the Romans called him) was also depicted by Botticelli and Jacques-Louis David, among others. Whether you call her Ishtar, Astarte, Inanna, Aphrodite, or Venus, in the end, the cultural impact the goddess of love has had on human culture, art, literature, and even the very values of female beauty and aesthetics is nothing short of awe inspiring, leaving one to wonder how much of what we take for granted in the way we look at the word today is actually rooted in the forgotten world of our long-gone ancestors