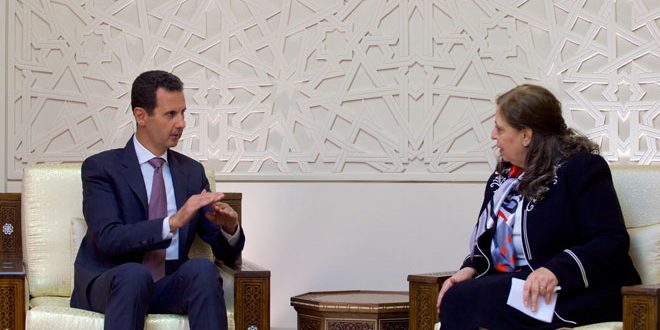 – President Bashar al-Assad met on Sunday Amina al-Shammat, the Chairwoman of the Central Commission for Inspection and Control.

During the meeting, President al-Assad highlighted the important role the Commission should play at the current stage, calling on the judge al-Shammat to be strict in combating all kinds of shortcomings, including negligence, poor performance and corruption that the war has contributed to their spread, which, he said, requires double efforts to eradicate these manifestations and enforce the law on everyone without exception.

President al-Assad stressed that combating these manifestations is not limited to decreasing the individual cases of corruption, but should also be accompanied by more effective monitoring of the performance of government institutions and not allowing any party that is in the position of responsibility or has business relations with the state institutions to intervene in the work of the Commission in any way whatsoever. The President also affirmed that the effective and adequate performance of any institution requires the prevention of corruption from permeating its cadres, dealing with negligent workers and addressing such cases duly, pointing out that the manifestations of shortcomings and corruption can always find ways to exploit gaps in the laws and permeate institutions, which stresses the importance of developing the working mechanism of the Commission and the performance of its cadres continuously.

In turn, al-Shammat affirmed that fighting shortcomings in the performance of the government institutions and stopping waste of public money in all its forms will be at the top of the Commission’s priorities in the next stage, stressing her determination to work optimally to achieve the aim of the Commission, especially in light of the current circumstances in the country.