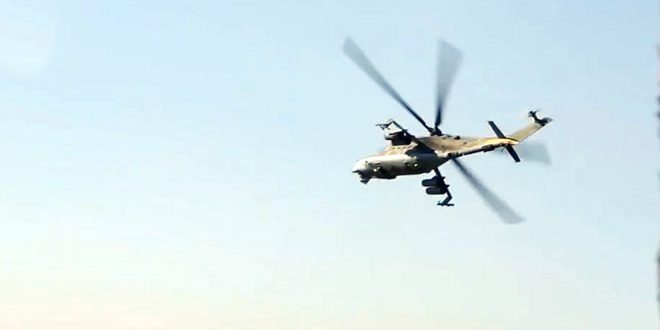 Army units killed numbers of terrorists, some from the so-called “Islamic State in Iraq and al-Sham” and “Jabhat al-Nusra” that are affiliated to al-Qaeda in various areas in Damascus Countryside.

Sources told SANA reporter that a unit of the armed forces confronted an armed terrorist group that tried to infiltrate al-Jarajir town in northern Yabroud, leaving its members dead and injured.

Other army units tightened control over Wadi al-Jarabei’ near al-Mashrafeh village after they killed numbers of terrorists and destroying their weapons and ammunition.

The sources noted that other numbers of terrorists,, mostly from “Jabhat al-Nusra” were killed and injured in Yabroud city, the farms of Rima and al-Sahl town, in addition to destroying a heavy machine gun.

A number of armed terrorist groups affiliated to the “Islamic State in Iraq and al-Sham” were eliminated in areas in Adra city.

SANA reporter quoted the sources as saying that an army unit destroyed a mortar and killed all members of an armed terrorist group from the so-called “al-Rahman Legion” in Alieh farms in Douma area.

A number of terrorists were killed during several special operations to the east of Joubar neighborhood and near the Police Hospital in Harasta.

Army units razed terrorists’ dens in Khan al-Shih area, while others clashed with members of terrorist groups in several areas in Daraya city, leaving many of them dead and wounded.

Terrorists blew up the control room for the water sluice gate in al-Bassel Dam in Hasaka, destroying it completely and causing large amounts of water to be wasted.

Director of Water Resources at the province Abdelrazzaq al-Awak said that the terrorists destroyed the control room for the sluice, wasting around 19 million cubic meters of water before repair crews managed to close the gate.

Al-Awak said that before the attack, the dam held around 159 million cubic meters of water used to irrigate wheat crops in the region.

A terrorist attack with mortar shells on the residential area of al-Abbassiyeen in Damascus caused material damage to a highschool for girls.

A source at Damascus Police Command told SANA that a mortar shell fell on the yard of al-Abbassiyeen high school for girls, smashing the classrooms’ windows without causing any casualties.

The source added that 3 other shells landed in the area surrounding al-Abbassiyeen Stadium, causing material damage to the site.

Several other schools have been targeted by the terrorist groups, including four in the city of Damascus. The terrorists’ crimes have claimed the lives of over 400 persons working in the education sector, in addition to causing material damage valued at SYP 100 billion.

A military source said that big numbers of terrorists were killed in al-Husn town including the leaders of the so-called ‘Sharia court’, in addition to destroying a number of their dens, gatherings and a cache containing huge amounts of weapons and ammunition.

The source added that army units targeted terrorists’ gatherings in al-Khalediyeh and Hosh al-Zawahira villages in the eastern part of the provinces, killing all its members.

In the meantime, an army unit confronted, in cooperation with residents, a terrorist group’s attempt to attack a station for potable water in al-Mesherfh village, and destroyed a pickup equipped with a heavy machinegun, killing four terrorists.

The source pointed out that several terrorists were killed in al-Mashjar al-Janoubi neighborhood in Talbiseh town in an accurate operation including the terrorists Said Swies, Ahmad Oyejan and Motaz Qassoum in al-Saan area in the central province.

Authorities also arrested members of an armed terrorist groups and confiscated their weapons during their attempt to flee from al-Zara town into the Lebanese territories, according to the source.

A military source told SANA that the army units killed and injured scores of terrorists in the neighborhoods of al-Marjeh, Bustan al-Qaseir, Bani Zaid, Old City, al-Hawzz roundabout in the Aleppo.

The source added that other army units killed scores of terrorists and destroyed 8 cars loaded with weapons and ammunition in the area surrounding the Industrial City in al-Sheikh Najar, in addition to destroying other 6 cars in Abten and Jub al-Safa villages.

The source pointed out that the army units killed many terrorists in the villages of al-Jadideh, Kwaires and Arbid.