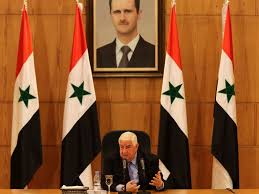 Since about 30 months, Syria has been exposed to a fierce attack waged by international Takfifi terrorism and financed by regional and Arab states under the supervision of great nations fuelling the crisis in the country and foiling any political efforts towards dialogue and the building of democracy. Unfortunately, those very nations are supporting the Takfifi terrorism.

On Wednesday 21st of August 2013, the world received the news that a chemical attack had been launched in Damascus countryside with victims counting. The Syrian government has repeatedly called for an international and scientific investigation backed by the United Nations of the facts and accusations towards it. While, the United States, United Kingdom, France and other countries were quick to blame, without any investigation or proof, the Syrian government of carrying out this attack warning that a red line had been crossed and that military action was on the table to “punish the Syrian government” even without an UN-mandate.

This is nothing new as the recent American Administration is dotted by examples of false flag operations, downright lies and distortion of reality to carry out their political plans and military adventures. The world witnessed how the recent American Administration lied about the Iraqi weapons of mass destruction to condone the invasion of Iraq in 2003 and the following killing of innocents and society destruction. And, more recently, we could again witness how the United States misled the UN when the American government used Resolution 1973 (the establishment of no-fly zone and the use of “all means necessary” to protect civilians within Libya) to carry out regime change in Libya.

The use of force in Iraq and Libya has incurred awful consequences and there have been no security, stability or improvement in living conditions in the region.

We, journalists of Syria, say the US aggression is but a flagrant violation of international legitimacy, UN Charter and flagrant disrespect for all international laws and conventions. We assert that Syria has the right to self-defense and the military leadership is to define the way of retaliation on the possible aggression. We, also, assert that the US pretext of defending the people is exposed for all, asserting that the US and all who would take part in any aggression, which would result in the killing of thousands of innocent people, are to be held accountable.

We do not call for war. We call for peace. The UN investigators must take their time to reach scientific results far away from political interventions.

Journalists are messengers of peace.

We need your solidarity:

– To stop the intended attack.

– To seek a peaceful solution to our crisis through Geneva 2 sponsored by the UN.

– To end the sanctions imposed on the Syrian people.

– To provide aid(s) for people who had been compelled to leave their homes because of the terrorist war launched on the state.

– To stop the destructive media role with the purpose of instigating terrorism in Syria and inciting extremism.

Let’s work together for security and peace according to the rules of law and ethics. It must be noted that the people of Syria have a great civilization and they look forward to build a future on the bases of the democracy, peace and fraternity instigating a global stability.